Review of  Factories for Learning: Making Race, Class and Inequality in the Neoliberal Academy, Manchester University Press, 2017 by Christy Kulz 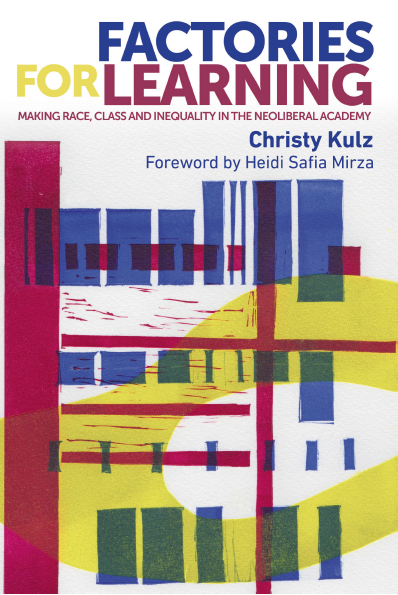 “You can’t talk about schools without talking about cities,” James Baldwin once commented, “and the cities are in the hands of the financiers, the cities are in the hands of pirates, thugs and our children therefore are victims of… victims of the principles according to which our country is run.”   Schools therefore are not places of learning but emblematic of the social forces that shape and maintain the wider societal moment and its spirit.

Christy Kulz’s brilliant and chilling ethnography of Dreamfields Academy shows that students no longer merely learn to labour at school, as Paul Willis once put it, but rather education itself becomes a factory. Schools do not foster critical intelligence but rather make, shape and discipline young people in the doctrine and dream world of neoliberal capitalism where success is a matter of discipline, graft and individual talent.  This is education as game show, endurance test and where everyone is vying to hang on just one more week and make it to the final and be chosen.

The book reveals the cruel hopes and authoritarian aspects of modern urban academy schooling. As a former teacher, Christy developed a feel for the changing atmosphere of secondary school education before she began the 18 months of ethnographic research that the book is based on. Through a combination of vivid descriptions and interview dialogues we learn about this academy and school, championed so heavily by Tony Blair’s New Labour government as the solution to inner city education. More importantly we get a real sense of what it feels like inside them for both for students and staff.

She portrays vividly the schools charismatic Principal – Mr Culford – and his mantra that ‘structure liberates.’ Himself a working-class boy made good, he describes himself as coming from a ‘mixed –race’ background and the problem he sees is that his students come from “unstructured” and “unhappy backgrounds.” He wants to give them self-discipline so that they can achieve.  Like contestants on The Apprentice TV show discipline and obedience is the precursor to staying in the game and the route to the ultimate prize.  That also goes for outside school.  The other vivid portrayal is of the ‘Chicken shop patrol’ where Mr Clark and Mr Dupont – a security guard and administrator –  drive around in their Mercedes checking for kids who are getting into trouble. Christy writes the men are ‘co-pilots on a private policing mission hunting down chicken-eating children.’

The thing that is so striking is the degree to which discipline and surveillance is at the core of the academy itself. Why have so many schools come to feel like prisons?  Is it to keep the students and teachers in or to keep the rest of the world out?   The lesson I took from this book is that it is both.  The academy space wants to separate off the students from the chaotic urban social ecology of south London.  It wants to put them in a disciplined and disciplining environment that ultimately is anchored in their body when they leave through the gate.

You know, I went to a comprehensive school over forty years ago where the institutionalized violence of teachers towards students was routine – it was called caning.  Many parents loved it… ‘proper discipline’ they would say as their children came home with punished hands.  A friend of mine, Pete Merchant, who I have just recorded a conversation with for The Listening Project, reminded me that many of those sadists were ex-army men who delighted in marching us errant working-class boys around the school as if we were on a military parade ground. The canes, metal rulers and slippers have been decommissioned – in larger part through the campaigns like STOPP, (Society of Teachers Opposed to Physical Punishment,) and many honorable educators.  But in our time neoliberalism has licensed a new form of abuse the ‘verbal caning’. Having witnessed one, Christy writes: “The shouting sent goosebumps down my spine as I walked down the stairs.  The sound filtered through the atrium to the ground floor where students, looked scared or giggled.” Unlike forty years ago the welt and blisters are not on the kids hands anymore but in their minds.

Through Christy’s careful portrayal we come not to simply judge Mr Culford and the other teachers but rather to understand them as true believers in the cruel promise of neoliberal success.  The discipline is cruel, straightforwardly but it is also cruel in Laurent Berlant’s terms: the conditions of possibility are not in place- for staff and students alike- for the dream to be realized.  This is true regardless of the exam results or the school’s attainment scores.

Christy describes two kinds of educational failure.  Firstly, the system fails the teachers.  Apart from the cool aid of neoliberalism teachers have almost no resources to try and make sense of how the social division of race, class and gender shape the school environment.  This recalls Vini Lander’s point that teacher education today includes almost nothing on critical pedagogy and operates within a ‘colour-blind’ stance that has nothing to say about how racism affects the educational experience. You can feel in the pages of this book that some of the teachers are struggling to understand the social forces that produce educational disadvantage and exclusion.  Christy shows how bewildered the teachers are faced with inequalities within the school and the disproportional disciplining of black boys.  All Ms Austin and Mr Turner can say to her is: “I don’t know, I don’t know, I don’t know.”  This is not only an individual failure but a structural and historically produced one.

Secondly, the school fails the students. It does not offer them the resources to make sense of their world and their place within it. Neither are the students dupes.  Some of them see all too well that the recipe for success is coded in terms of race and class. As Samuel says they are not confronted with “up-front racists” rather the recipe for success and failure contains tacit racial script.   Racism is disavowed constantly and interned tidily in the historical past tense.  Yet, students are encouraged to be the ‘three C’s controlled, compact, concise.’  Christy sees this ideal as a class inflected form of whiteness.  Olivia, who described herself as mixed- race, comments on the double standard where smart ‘white kids are nerds’ but smart ‘black kids are called bounties (white on the inside).’

Christy’s analysis racism here is his resonant with Fran Fanon’s conception of ‘sociogenesis’ in which racialised scripts, or masks, are not internalized but performed or donned within the dramaturgy of whiteness.  So, for her, the Principle Culford comes to be defined as white because he is the ‘embodiment of whiteness, he represents this normatively and teaches it to the students.” At the same time that all these complexities are playing out on the social stage of the school, outside racism can target and fix black subjects – teachers and students alike – within the blink of an eye regardless how they might or might not be acting.  What Christy offers us is a language to try and understand what is unfolding in all its complexity and brutal simplicity. What is also cruel here is school and society seem unable to comprehend any of this because any attention to race and class bias is ‘subsumed beneath neoliberalism’s focus on individual achievement and future success.’

This is an important and urgent book that left me with a sense of outrage because these black, white and Asian working-class students, and every school child for that matter, deserve so much more from education than this.  James Baldwin argued bluntly that education is not obedience. He warned that black children in America undergoing the ‘education system’ run the risk of ‘becoming schizophrenic.’  I have often thought that educational success for students can come to feels like cultural suicide. Baldwin says in this situation: ‘It is your responsibility to change society if you think of yourself as an educated person.’  Christy shows us how far neoliberal education has moved us away – as teachers – from what bell hooks calls our ‘prophetic vocation’ and why it needs to be restored urgently.  This book outlines with sociological precision and keen attentiveness the shape of that educational betrayal and we should thank Christy Kulz for this chilling gift. 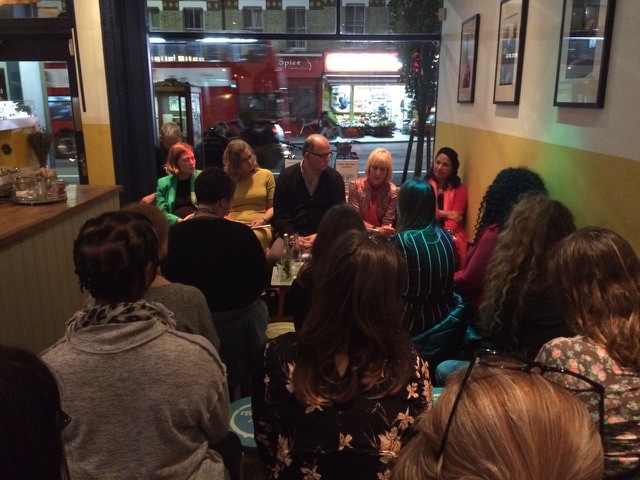 Les Back is Professor of Sociology at Goldsmiths, University of London.

Factories for Learning: Making Race, Class and Inequality in the Neoliberal Academy by Christy Kulz is published by Manchester University Press, 2017