Blog Number 1: – The View From Afar

The PhD Migration reading group is an interdisciplinary and international student-led space for PhD students working on migration at Goldsmiths. This was our first conference …. And this is our first blog post. We will have three themed posts reflecting on the conference. This, the first, is the view from afar : our initial aims and an overview; the second will be a view from within and set out the content of the conference; and finally, the third will be a view from the back, ‘behind the scenes’ look at conference organisation!

Our aim was for the conference to be a different kind of event; to bring together a group of senior scholars and PhD researchers working on issues of racism and migration both in the Global North and South. We also wanted to showcase activists and artists telling different tales of migration and racism and how the two connect. The aim was to foreground race. As a number of scholars have pointed out, there has been a notable silence on race in migration discourses (John Solomos 2014; Alana Lentin, 2014; Bridget Anderson, 2013). Yet rather than mobility, the figure of the migrant is more about race, gender, class and nationality. It is a construct that is inherently racialized, (Anderson, 2013; Back et al., 2012).  As the work of Gurminder K. Bhambra (2015) highlights, the links between race and citizenship and the boundaries of belonging are highly racialized. 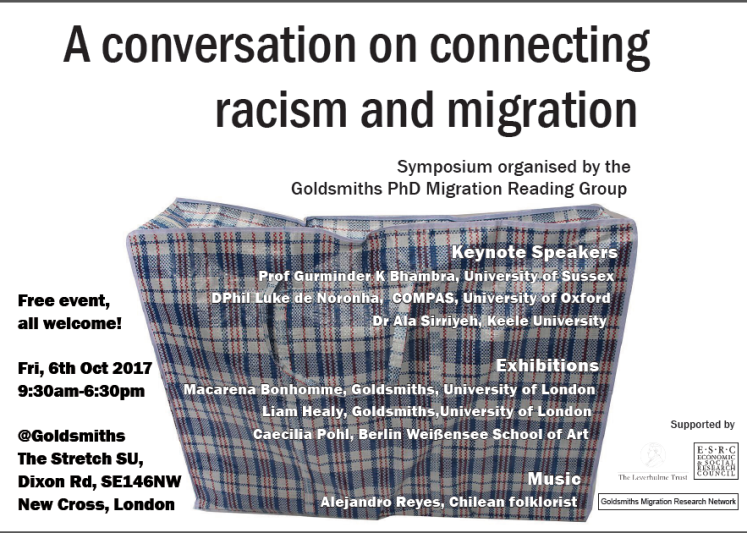 THE LAUNDRY BAG…. As our own work, that of the speakers and of others reveals, migration is a messy, complicated business. People have always migrated, it is only now, as Bridget Anderson’s work highlights that it is considered increasingly problematic. Thus, we chose the tartan-checked shopping bag as our motif, “the international symbol of the thrifty and far-travelled” as described by novelist Zadie Smith in her book Swing Time. The bags represent movement and practicality, but their origins reflect the colonial linkages and capitalist networks underpinning human mobility. So more complicated than it seems. The design is based on a plaid design from 16th century, Indonesian textile artisans and the bags have a rich aesthetic and social history, reflected in the plastic polymer-based materials of the bags today. Different countries use different names for the bag, for example: “Ghana Must Go Bags” in Nigeria and “Turkish Suitcase” or “Poles’ Bag” in Germany. These disparaging connotations and the crucial role the bag plays in globe spanning migrations have provoked numerous artistic and academic responses, including our conference design.

We chose our speakers to incorporate PhD students, activists, and senior academics. We wanted the conference to provide a non-hierarchical platform for all to speak. We had three keynotes, the first from Luke de Noronoha, a PhD student at Oxford on “Race and racism in multi-status Britain”, the second from Let Us Learn a youth led organisation who spoke about being undocumented and their campaigns, and the third from Professor Gurminder K. Bhambra on “The difference that race makes: Rethinking superdiversity and migration studies”.

Ala Sirriyeh organised a panel on undocumented youth in the US: “Dreamers vs. Bad Hombres: The undocumented youth movement and solidarity in the USA”. Joining her were Felipe and Kate from Young paperless and Powerful, a youth led organisation in Ireland.. 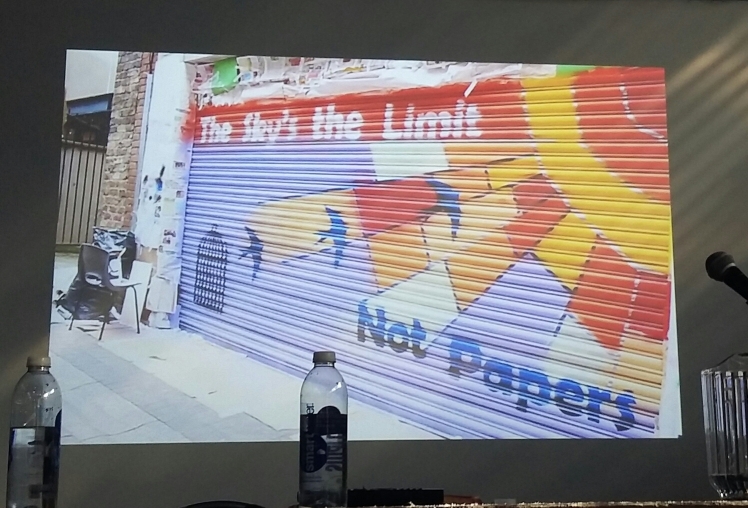 We closed with a beautiful performance of “The dialects of Chilean exile” by acclaimed Chilean folklorist Alejandro Reyes and our very own Ignacio Rivera, performing a music piece by Victor Jara based on the poem of the Chilean Poet Pablo Neruda’s “Aqui me quedo”: I’m here to stay.”

We will report back on key notes with Vox pops and more in blog no2 in December… watch this space!

Find out more about PhD Migration Reading Group at: https://www.facebook.com/groups/PhDGoldsmithsMigrationGroup/

Anderson, Bridget L. 2013. Us and Them?: The Dangerous Politics of Immigration Control. Oxford: Oxford University Press.

Sharma, Nandita. 2015. “Racism.” In Citizenship and Its Others, edited by Bridget Anderson and Vanessa Hughes. Migration, Diasporas and Citizenship. Basingstoke: Palgrave Macmillan.