Within urban sociology, one of the main interests amongst academics centres on the implications of gentrification on ‘working-class’ communities. Other theories offer deeper theoretical perspectives, aiming to understand the political underpinnings of these urban processes. Academics however are beginning to explore new lines of interest, including the conscious installation of public art into urban areas with the aim to make them seem more attractive and ‘lure’ a creative class of middle class ‘trendy’ professionals. With these theories however, the question still remains of what now? What are communities doing to fight back against the ‘inevitable’ tide of such urban transformations?

Adopting a mixed-method qualitative approach through the use of interviews, participant observations and online secondary analysis, this research aims to take the reader on an ethnographic and photographic journey of my time spent in Brixton in 2018. The aim was to investigate whether art was part of the problem in accelerating the gentrification of the area or part of the solution in the way in which it was incorporated into and used as a tool by the community in fighting back. The focus here in particular was the Save Brixton Arches campaign, a project that began as a reaction against the redevelopment of the railway arches on Atlantic and Station Road. Four years ago, Network Rail and Lambeth Council proposed the redevelopment of the arches to the traders who occupied over 30 independent businesses. The traders were told that once the redevelopments had taken place they were able to return to their units, but with an estimated 300% increase in rent, this seemed likely to be impossible. After a long hard battle of petitions, national press coverage, protests and a legal case between the traders and Network Rail, on April 7th 2018 the traders were forced to close their shutters for good.

To begin the research process, I began some online research into the regeneration of Brixton. In 2013, Lambeth Council published a Supplementary Planning Document outlining some key regenerative changes to the area. On closer inspection, it is clear that a major aim was improving Brixton’s physical appearance and enhancing the area’s vibrancy through arts and creative industries with the aim that this will “attract more visitors” (P.1). A specific example is the Somerleyton passage, a connecting route between the East and West of Brixton. The document also outlines that they aim to create ‘cosmetic’ (p.28) changes to the passage and install a multi-colour lighting installation. These findings support previous academics who note the conscious efforts councils and urban planners are making to improve the appearance of urban areas in the aim to attract a ‘creative class’ of trendy professional young people.

At the core of this research was the ethnographic observation of a protest led by Save Brixton Arches on the 5th February 2018. This three year anniversary protest was not only to continue the fight against the redevelopments and show solidarity to the remaining traders, but also to highlight the health and safety breaches which were putting the traders and the public in danger. Discourses of struggle, liberation and protest ran through Brixton Station Road on that day through several different forms of art which will now be discussed.

As I walked down towards the protest, loud Caribbean reggae music played through a big speaker, the base was palpable and echoing. It was clear that the music was acting as a buoy of morale for the activists and continued to uplift the community’s spirits when played in between speeches. Whilst Brixton is widely known for its multiculturalism and roots in Afro-Caribbean communities, it appeared that the reggae music was also a way for the community to reassert their cultural and place identity within Brixton. It was being used to reassert their opposition to what Brixton was becoming, a homogenised and capitalised version of its former self.

Upon arrival I noticed a local artist had created Papier-maché caricature heads of the Lambeth Council MPs, Sue Foster, Matthew Bennet, Lib Peck and Jack Hopkins. The heads were placed high on a pole at the centre of the demonstration. The caricature style of the heads was an obvious attempt to create a comical effect,  which caused attendees to point and laugh. Cellotape spiralled down from the MP’s caricature heads on to the floor leading underneath the boarded up arches. After speaking with the artist, he expressed that the tape path represented how responsible the MP’s are for the redevelopments and evictions as well as their failure to support the local community. 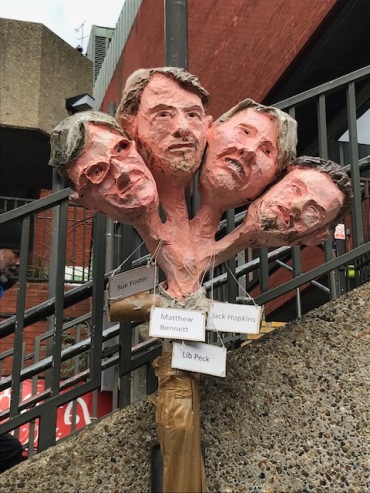 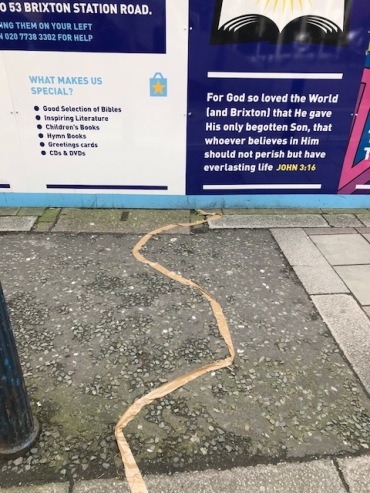 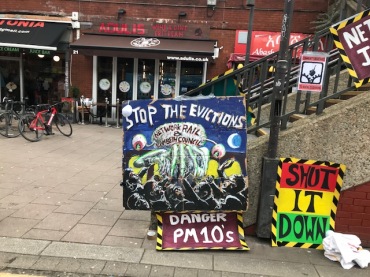 During the speeches, Potent Whisper performed his spoken word piece ‘Our Brixton’, which addressed the 300% rent increase for the traders, those of whom would be unable to afford. Potent Whisper also placed emphasis on the inextricable link between the gentrification of Brixton and the way in which it strips away Brixton’s cultural identity:

“Brixton is becoming a commercialised, bastardised, shadow of its former self that sees its people starving in the streets despite all its wealth.” 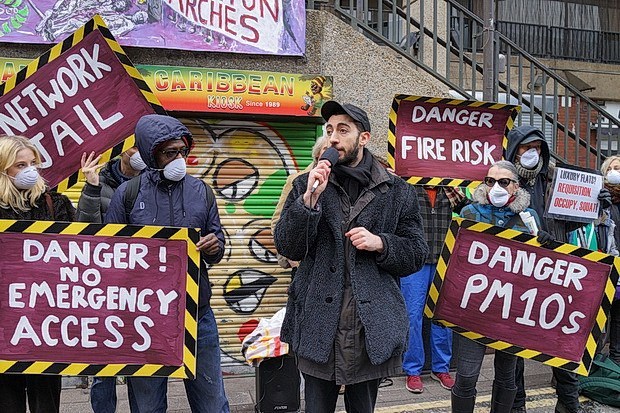 There were also many repetitions in which Potent Whisper would shout “Who’s Brixton?” in which the community would shout back ”Our Brixton!”. Whilst the demonstration was a clear protest against the redevelopment of the arches it became clear that it was also fighting against a wider picture of Brixton’s fast changing identity.

Once the speeches had taken place, the community and myself then gathered around the boarded up arches in a line, held hands and took a three minute silence, one minute for every year the Save Brixton Arches had been going on. Whilst news cameras walked up and down the line to capture the moment, nobody who was taking part made a sound. With some gas masks still on protesters faces and banners being leant up against the boarded up arches, the silence felt powerful, with the only sounds coming from the outside traffic, the public going about their daily lives and the camera crews walking up and down trying to get their shot. To the community, the three-minute silence served a purpose of remembering the traders and the three-year long battle they underwent to try and save their businesses for themselves and their community. For me, the three-minute silence was a performance, in which the community held hands and stood against the arches, acting as a symbol of the community uniting against the opposition. 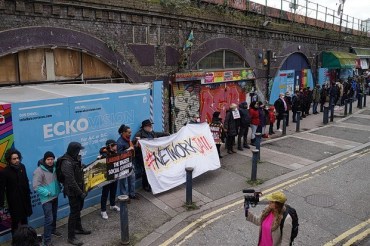 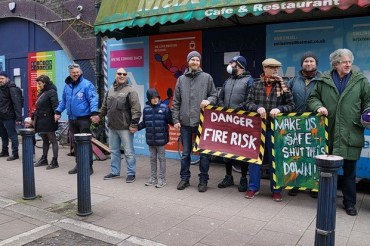 After a long hard battle, the remaining traders were forced to close their shutters for good. Whilst this battle was over, the fight against the global phenomenon of gentrification continues. This research shows that the use of art is being commandeered by local councils in gentrifying neighbourhoods, including Brixton in order to lure a creative class of middle class ‘trendy’ professionals. With it the ethnographic data also illustrates the the creative energy which ran throughout the Save Brixton Arches campaign, in which the campaigners continued to utilise the use of performative and visual art to attract outside audiences and make their campaign more noticeable to the public. The use of art also provided a news ‘hook’ which attracted media attention and therefore greater publicity for the Save Brixton Arches campaign. Whilst we can see art is being increasingly incorporated into regenerative schemes, this research also highlights the way in which communities are adopting innovative methods of protest and demonstration, adopting art as a form of political resistance against these global urban transformations.

Crystal Nicholson is an Msc Social Research postgraduate student with an undergraduate degree in Sociology and Anthropology. When she graduated in 2018, she worked as a research assistant at Goldsmiths University for Paul Stoneman and Les Back. In September, she is starting the graduate programme CharityWorks working as a researcher for a non-profit charity.

Florida, R. (2017) The New Urban Crisis : How Our Cities Are Increasing Inequality, Deepening Segregation, and failing the Middle Class- and What We Can Do about It. New York: Basic Books.

Schacter, R. (2013) ‘From dissident to decorative: why street art sold out and gentrified our cities’ The Conversation, 9 November. Available at: https://theconversation.com/from-dissident-to-decorative-why-street-art-sold-out-and-gentrified-our-cities-46030 (Accessed 3 July 2018).

Error: Twitter did not respond. Please wait a few minutes and refresh this page.